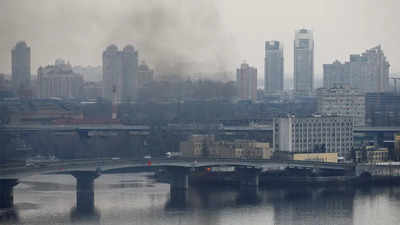 Panic Building Up As Airports Being Targeted, Say Students In Ukraine

BENGALURU: For Merlin (name changed), a fourth-year Indian student pursuing MBBS in Petro Mohyla Black Sea National University in Mykolaiv, Ukraine, the day began at 5am when she woke up to the sound of fighter jets.“The phone hasn’t stopped ringing. Folks from India have been continuously calling asking what is happening. We have an airbase in our city. There were no classes on Thursday,” said Merlin, who’s originally from Kerala.There are hundreds of Indian students in Ukraine still living on campuses. “We could not leave. Some of us had exams. For others, the university said they will hold online classes only for a month. If we do not return by end of that month, we will be expelled, they said. They pressured us to stay back,” she said. While many of their juniors left for India, many fourth-year students stayed back.The students are now stocking up on food, water and other essentials. “When we went out to the water dispenser, there was a notice saying it is empty. Shops are running out of items. Thankfully, we have enough food,” she said. The students have been advised to get back to their hostels by 5pm.

“We are continuously watching news and are in touch with other students. We have been asked whether we want to move to the western regions by the agency but we’re waiting. We have also identified the bunkers and bomb shelters in nearby places in case any emergency occurs. Martial law has been implemented. Tension is building up as we realise more and more airports are being targeted,” she added.The students have been asked to submit their passport details as the embassy is trying to find alternative ways through which they can be evacuated. While many had online classes on Thursday, others did not. “I would relocate to the western part, which is away from Russia and closer to Poland border. If the embassy takes us out faster, I will go with them. Else, I will move by myself,” said a fourth-year student from Mangaluru.A third-year student from Odisha said: “The ticket price was Rs 2 lakh. We are all from middle-class families and could not quickly generate such an amount. My ticket is for March 3. Now, we have to wait and see what happens.”“Parents are worrying in India. It is also because of how the Indian media is portraying it. Some of them showed old satellite footage, which worsened their anxiety. In our place there are buses and trams, but we do not know for how long,” said another student from Mangaluru. Some students who were studying in China have taken transfer to medical colleges in Ukraine. For them, the war has come as a double whammy.(TOI)